The birth of modern dance began when a number of choreographers and dancers rebel against the rigid rules of classical ballet.

They felt that the rigidity of ballet was not compatible with their main purpose of communication. Forgoing the usual look and concept of costumes, structured techniques, and shoes of ballet, modern dancers preferred a style that was less restrictive.

Instead of ballet shoes, modern dance pioneers grace the dance floor with their bare feet and revealing costumes. Modern dance became a broad genre of western concert or theatrical dance that was developed in the United States during the late 19th and early 20th century.

It mainly focuses on the dancer’s interpretation of dance steps in comparison to traditionally structured dance routines that ballet had. Unlike classical ballet, modern dance rejects limitations and breaks boundaries, favoring movements derived from the inner feelings of dancers. The important figures of modern dance

Here are some of the important figures of modern dance:

Isadora Duncan was the first woman to ever bring modern dance to the public.

Known as the founding mother of modern dance, she was largely self-taught and presented her first recitals in 1898. Discarding the typical outfit of the tutu ballet dress and ballet shoes, she wore tunics that freed the body, displaying the essence of her dance, which is movements.

She believed that dance should be the “divine expression” of the human spirit, which she sought to develop a style that was more natural and expressive than ballet.

Elements that framed the characteristics of her dancing include far-flung arm positions, an ecstatically lifted head, and unconstrained leaps and strikes.

Isadora established her first dance school outside Berlin, where her journey to develop dance theories and a dance group began. ‘The Isadorables’, Isadora’s very own dance group, was born.

Martha Graham was considered the pioneer of the first generation of modern dancers.

She was honored in the US for her modern dance techniques. Beginning her journey of studies in Denishawn school in 1916, Graham rose from a student to a teacher and became one of the most well-known performers in her company. She developed her own language of movement through creating a new dance technique that was similar to ballet but with several differences.

She mainly focuses on basic human movements, which she aims to expose basic human emotions. Her movements, jagged and sharp, were in stark contrast to the long fluidity of ballet. Martha saw the back, the pelvis in particular as the center of all movements. Hence, many of her dance moves originated from powerful arches or spirals that focused on the back.

Doris Humphrey was a choreographer, theoretician, and creator of the dance technique, fall, and recovery.

A student at Denishawn school in Los Angeles, her teaching and creative abilities are quickly recognized, leading her to become a lead soloist in the company. After Doris left Denishawn in 1928, she gave her first concert with Charles Wiedman, another modern dancer and choreographer before forming her own company in New York.

She wrote a book in 1959, which was based on the theory of dance composition. Humphrey wanted to create a dance that reflected her personality and is fitting to the standards of contemporary America.

Similar to Mary Wigman, who utilized space as a form that is present in her choreography, Humphrey made use of gravity, displaying the human’s desire for balance and urges of adventures. Dance theories such as Water Study (1928) which incorporated her theory of fall and recovery were some of her experiments in dance theory as an attempt to reduce dance to pure movements.

Humphrey was extraordinarily influential as a teacher for conducting classes in her own school and also at Bennington College in Vermont from 1934. She eventually founded the Juilliard Dance Theatre years after in 1955.

One of the most highly regarded modern dancers and choreographers in Central Europe, she was one of the principal proponents of modern dance during the 1920s and 30s.

Her choreographies often incorporate non-western instruments such as bells and gongs from Asia and Africa. Wigman, who is known to utilize space in choreography, would include ecstatic spinning as one of the main significant routines in her dance moves. Her most well known musical accompaniment would be the percussion, which contrasted with her use of silence.

Wigman was concerned with the basic fundamentals of human emotions, relationship, and superstition, thus leading her to choreograph some of the most iconic dance moves. In contrast to the usual ballet shoes and outfits, Wigman’s costumes were fairly simple, which included marks and made of rough fabrics.

Moods and emotions are used in dance routines

In comparison to ballet, dancers are encouraged to use their mood and emotions to design a new routine in modern dance. It is not uncommon for modern dancers to invent new steps instead of a structured routine. Basic movements of modern dance are more fluid and mainly surround the idea of dancers expressing their emotions through a certain style.

Certain dance steps may also be performed on half-point bare feet or modern dance sandals for performances. The basic movements often include chain turns, gliding steps, jumps, and leaps, which are similar to ballet steps. Modern dance choreography for groups would frequently incorporate geometric shapes such as a triangle or circles to enable the audience to understand the theme behind each dance routine.

The singular use of space The singular use of space is one of the defining characteristics of modern dance.

In ballet, the relationship between the dance and the music is that it corresponds with each other. Two elements could not do without one another. On the other hand, modern dance movements may disregard the link between both together. The sound of dance movements could just be the only backdrop left without the presence of music.

Choreographers go beyond the creation of dance routines

Choreographers in modern dance would often go beyond just getting involved in the development of a dance routine. They would take ownership of lighting, costume, and scenery designs. In contrast with ballet, where dancers mostly aspire to choreography and barely continue their journey of dance after they have achieved their goals. Modern dancers went through the process of making sure that the emotions and performance are delivered well on stage.

Modern dance has become one of the most popular genres in the present day. It could also be an avenue for dancers to enjoy ballet dancing without many restrictions on dance techniques and choreography. Present-day modern dance has moved their focus towards acrobatic and aerial movements and less interpretation. The current trends of modern dance articulate crossover styles from other dance genres by adding words or drama.

The origins of the modern dance syllabus are born from the roots of ballet.

However, modern dance today incorporates moves that are infused with contemporary interpretive movements. The new trends of modern dance also focus more on actual body weight on the creation of movements. Many modern dance competitions throughout the nation judge dances based on the criteria of their abilities. Hence, dance competitions often serve as a platform for modern dancers to express their innermost emotions. Modern dance, with its elegance and ethereal performance, could be touching to watch if some of the performances are connected to deeper emotions such as grieve. 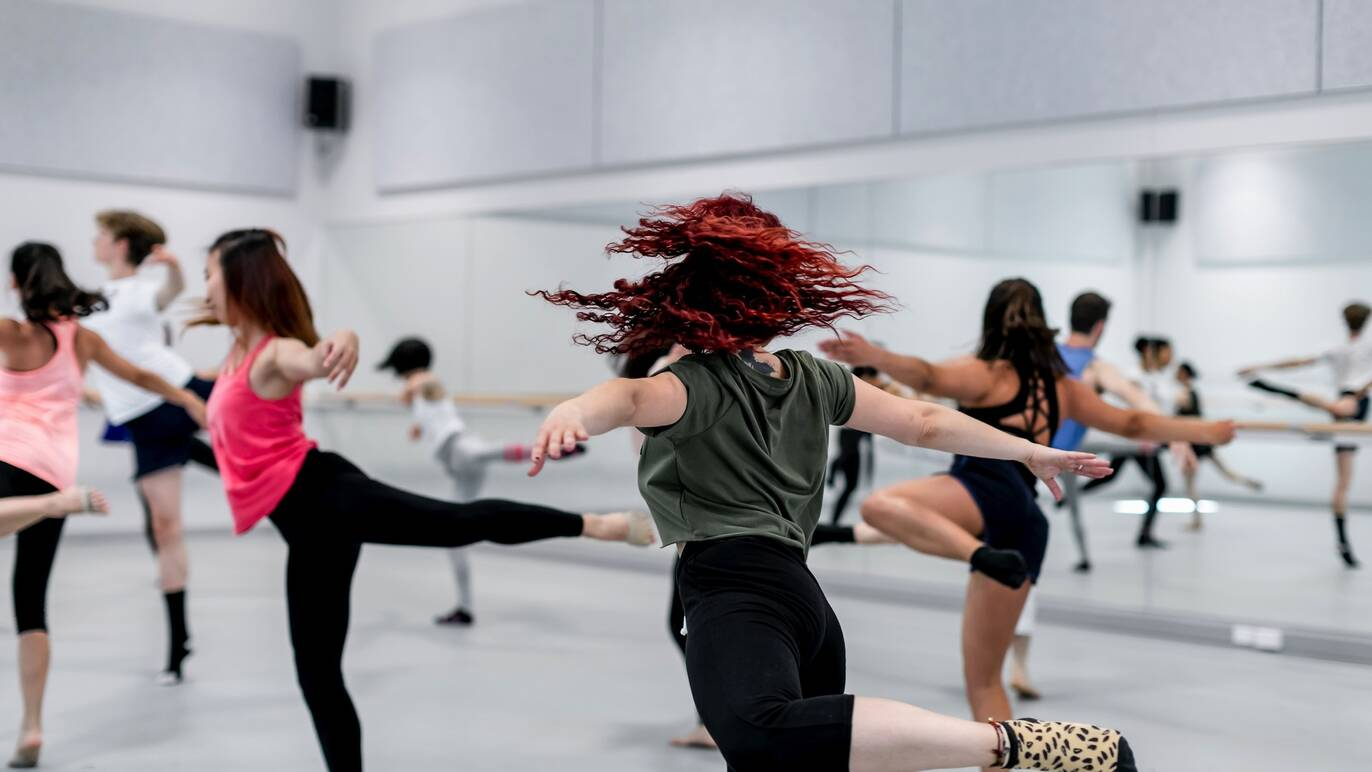 Modern dance teachers today strive for far less angular body movements and more delicate looks to their choreography. As the origins of modern dance were developed from the roots of ballet, dance teachers should possess a solid background in ballet technique and syllabus.

Dancers in the present day are aiming for the creations of a unique and highly customized dance routine as the importance of developing the most unique dance style is significant to every modern dancer’s career.

Present-day modern dance focuses more on solo dance performance. The emerging trend of solo performances for modern dances requires the delving of knowledge in drama and varieties of dance music. Much of the performance depends on the dancer’s performance and their ability to dramatize the essence of the music through their routines.

If you loved history posts, you can also read our broadway dance history and history of folk dance.

Today, the industry of modern dance is still growing with many individuals seeking modern dance lessons. If you are looking into taking up modern dance as a beginner, you could look up some of the dance schools online for possible classes.

For starters, there would be certain requirements of outfits such as shoes and clothes that you need to abide by. While certain classes may have a strict requirement for dress code, the safest outfit that you could pick for a modern dance class would be ballet shoes, tights, and a top.

You could also go barefoot if you enjoy the feeling gliding across the floor without any restrictions.

Sally
In her free time, Sally would spend her free time watching random dance videos on Youtube or binge watch dramas on Netflix.
← Things Every Dancer Wants
Why Do People Like To Dance? → A November 2020 video of the late Marta Gonzalez, former prima ballerina in the 1960s, was released on Youtube by A...
Read More
Back to News
Use left/right arrows to navigate the slideshow or swipe left/right if using a mobile device